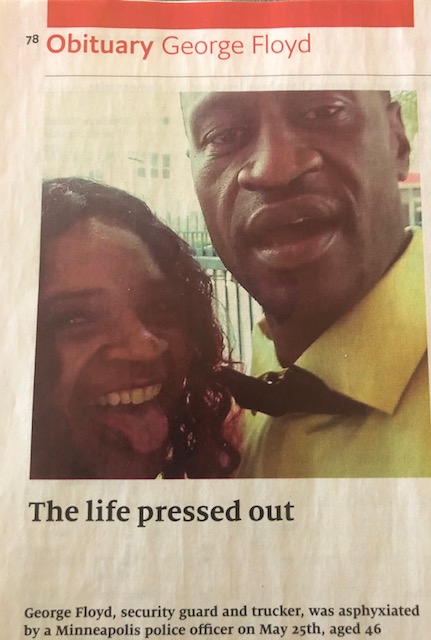 As a Trustee of the San Diego Unified School Board I feel compelled to speak out about the murder of George Floyd.  The nation is now waking up to the reality of systemic racism within our police departments, as well as other institutions.  We can no longer refer to “just a few bad apples.”  Of course, the vast majority of police officers are decent and courageous people, carrying out a difficult job.  But as Chris Rock once said, no one would put up with a few “bad apple” pilots crashing airliners.  One example of the systemic problem was that Floyd’s murderer had been selected by the system to train the other new officers on how to act as a police officer.  Along with many elected officials I support the formation of a truly independent San  Diego  police review commission.

At San Diego Unified we have our own sworn police department that addresses issues internally in the schools, as well as external threats ranging from human trafficking to school shooters.  During the pandemic our officers have assisted with food distribution to our school families.  But at this time we should review our own police practices.  We also need to better understand how our armed, uniformed officers are perceived by students of color, particularly African Americans.

We must also look at systemic racism in our educational system.  A few years ago the Superintendent convened a workshop for school leaders with the National Equity Project to address the issue of low expectations for our students of color.  (As a psychologist I can say that teachers’ expectations have a significant impact on student outcomes.)  A few participants at the workshop asked me, “What happened?  Was there an incident that led to this workshop?”  Yes, there’s a problem and it has been around for many, many generations.  Our own mission statement that  all students will succeed has not resulted in equal outcomes for African Americans and other students of color.

We have a pilot program that has a few ethnic studies courses in our district.  But that is not enough.  Our goal is to have multi-ethnic perspectives infused into our entire curriculum at all grade levels.  It is becoming increasingly clear that we cannot move forward if we do not realistically understand our history and the through line of racism.

This weekend I participated in a protest with the overriding theme of Black Lives Matter.  I was encouraged by the predominance of so many young people of all ethnic backgrounds who were participating.  Many white citizens are starting to wake up.

Seeing a video of a man being tortured for 8 minutes and 46 seconds until his death is horrifying for all decent people.  I realize that grief and talk without action is not enough.  The next step is listening.  We need to engage with San Diego community members of all races and backgrounds to address the damage against students of color within our system.  After all, they include our future police officers, judges, social workers and healthcare providers.

As a full school board we can only take official action at a regular board meeting and I am addressing this as an individual member.  Our next regular meeting is June 23.  However, we have a already scheduled board workshop on June 16 at which time I plan to begin the meeting with 8 minutes and 46 seconds of silence to honor the life of George Floyd.